Doris Salcedo’s piece Shibboleth is located in London in Tate Modern Museum. Her piece is a large rupture in the floor of the museum that looks like a geological fault of as if an earthquake broke the floor. 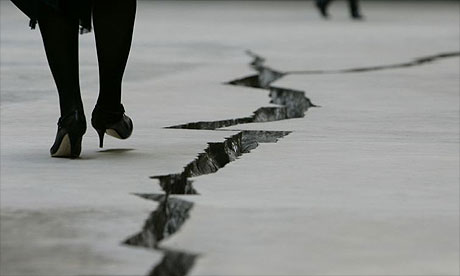 As she referred in her film Public Works the word comes from a bible verse. The Bible verse (Jud. 12 1-7) states that Jephthah with the aid of the people from Gilead were against the people from Ephraim, they prevented the people from Ephraim to cross the Jordan River and if they would attempt to, they will kill them. In order to know if they were people from Ephraim they would ask them to pronounce the word “Shibboleth” which the people from Ephraim pronounced it incorrectly as “Sibboleth”, as they do so the Gilead would kill them. As claimed in the bible, Around 40 thousand people were killed which explains why Salcedo call it “the biggest massacre in history.” Her purpose with this art piece was to create a symbolism of the rupture or separations in relationships based on racism of thought, culture and looks for lack of understanding and tolerance between different groups of people. It also symbolized that those events can’t be erased they will always be there as a “scar” to families and friends of the victims, like her piece which is now paved but its form is still visible.

Blog was created with the aim of establishing understanding of the stories behind Art Works in order to know what the artist is trying to communicate.
%d bloggers like this: